The 90+ Mindset: How to nail the GAMSAT before you even arrive at the test centre

I read on Reddit recently that my essays weren’t anything special, just some fancier words. Perhaps. To be honest I never said my essays were special, only that they got 91. Which they did. So, whatever works. *Shrugs*

This said, it got me thinking about the locus of success. Is it all in the essays? The essays are an output. But there are SO many inputs out of site that you don’t get to see. I have as much to say about mindset as I do about writing; and this knowledge was as much a part of my success, if not more, than the techniques and guidance I write about and mentor students in.

Around half way through my preparation I stopped caring about the result. I didn’t prepare to get into med school, I trained to be perfect. If a boxer spends each moment of roadwork, or bag work, or sparring thinking about being a champion he/they will eventually tire themselves out. Your attention needs to be in the moment, not the future. You do it for its own sake, not to get somewhere. I work hours every day contributing resources and guidance and feedback to students because I’m obsessed with Section II. You want to become obsessed with mastering the quality of your inputs for its own sake, and take your eye off of the outputs. This is the first step.

This is easier said than done but it’s importance can not be understated for Section II. I had a mentor once who I asked “how can I achieve a flow state?” The response took me just under five years of solitude in a room with a cup of tea and a candle sitting in discomfort to comprehend at a level, and I still don’t fully understand it.

He said (I’m paraphrasing substantially): “The first step is balance. Arrive at balance by doing the opposite of what is currently unbalancing you. In doing so you develop a foundation upon which you can stand and have stance. With stance – two feet on a solid foundation – you can relax. When you relax you can begin to move in relaxation which leads to agility. When agile you connect with the opposing force, move in harmony with it, and this is called flow.” Good writing is an activity which requires flow. So, it requires agility, relaxation, stance and balance.

Many students are unbalanced by the size of the task. The enormity of the exam and its perceived consequences. Many fear, and become tense. When tense (unrelaxed) you cannot be agile in response to the task. To depart now from this mentor’s words; your fear is lying to you. The outcome of the exam is irrelevant. If you are meant to be a doctor you will pass the exam. If you are not, you won’t and are needed elsewhere (or are needed elsewhere in the interim between now and when you do pass the exam). You don’t need to be surprised at the result, because the result is simply a reflection of the quality of your attention and inputs for all of the moments before the exam. It’s like Mohammed Ali before the George Forman fight saying that the fight is determined in the months before – based on the training. So, you train for Section II. If you put a 90+ effort into each moment for the months leading up to the exam, guess what the result will be? It can’t be anything other than 90+!

On the day: don’t be near other students. I didn’t go near anyone. Didn’t want them to talk to me, be near my energy. I didn’t want their fear and nerves. I took the week off before the exam to relax, have fun, meditate, and I practiced walking from my house to the test centre at the right time every morning to time the walks and also get used to arriving. I imagined myself sitting down, and my hand landing on the mouse so on the day it didn’t feel like the first time I did anything – it just felt like training.

I listened to binaural beats. Breathed deeply. Ate the same thing every day to time when I would get hungry in the exam, and ate low GI foods so they would last.

It’s just an exam. “No, Michael, I need to be a doctor because my parents/friends/partner/childhood blah blah” yeah ok, cool. It means whatever you make it mean. If you make it mean nothing, that works, too. It can just be what you’re doing this Tuesday. Or whenever it falls. No one is responsible for your internal monologue but you. Speak kindly to yourself – ideally like you would speak to someone you are in love with. The world doesn’t end if you don’t get a score. It’s a few pixels on a computer screen – it doesn’t mean anything about YOU as a person. Unless you make it mean that. Other people might, sure. But that’s their business. There are three kinds of business: your business, others’ business, and God’s business (or Allah, Krsna, whatever you like). Generally your pain comes when you’re minding someone else business. So mind your own business.

Things will be much easier when the intent is to contribute to others. I prayed “Great spirit, use me. Take everything I have, leave me with nothing but what I need to serve. Burn away everything in me that is not pure or does not help. Do not be gentle. Make me a mirror for others’ beauty to be reflected back at them.” .. this might sound fanatically religious, I’m not. Although I was a monk. But this isn’t an autobiography and that feels like many lifetimes ago, 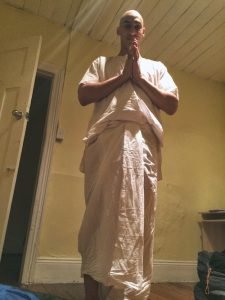 That has nothing to do with the GAMSAT but if I write about nothing else all day every day I’ll go crazy. Point is: I believe I found the wind at my back because my intend was to help, and it was pure. Life tends to contrive to arrange things very nicely for you when you aim to give. Take your eye off of the results, and ask what life wants from you. If it is to be a doctor then you can’t really f*ck it up because life gets its way 100% of the time. So you couldn’t really muck it up if you tried. You would get the score you needed in spite of yourself.

Ok enough from me. I have a woman huffing angrily at my noisy typing. Best not to stir the dragon *chuckles*

Some more of my writing:

The Ontology of Task A Structure – Logic

The Task B Hook